Gent goalkeeper Lovre Kalinic is edging closer towards a move to Aston Villa, according to claims from Belgium.

Het Laatste Nieuws claims the Jupiler Pro League side are looking to make new signings in the winter market, but they will first allow the Croatian international to make a switch to the Championship club.

It’s claimed the 28-year-old already travelled to Birmingham on Wednesday as he looks to seal a switch to Villa Park.

If things go well, the stopper,  who has been the top target for the English club, could even undergo medical and other tests today.

The report mentions that Villa have long been an admirer of Kalinic as they even made an attempt to sign him in January 2016, but the player didn’t get a work permit, which is why the deal didn’t take shape.

That no longer seems to be an issue, which is why Gent and Dean Smith’s side are close to reaching an agreement over the transfer for a fee in excess of €10m.

It will be the record sale for the Belgian outfit, breaking their previous record of the €9m Watford paid for Sven Kums in 2016. 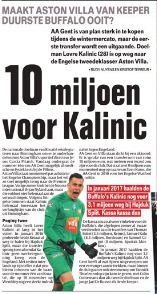 Kalinic has made 18 appearances in all competitions for Gent this season, conceding 27 goals and keeping five clean sheets in the process.