Last weekend, AS reported that Antonio Rüdiger has ‘already rejected’ Chelsea’s contract offer and Real Madrid are ‘working to convince’ him join their project.

The 28-year-old has six months left on his current deal and has attracted interest from the La Liga side, Bayern Munich and Paris Saint-Germain.

Sky Deutschland say the Blues star has ‘decided against a move back to the Bundesliga’, which is why the option to join the Bavarian club is ‘off the table’.

Real Madrid, on the other hand, are now on top of his wish list, as Carlo Ancelotti’s side wanting the Germany international is also reported in today’s edition of ABC.

Los Blancos took David Alaba on a free transfer in the summer and now ‘seek to repeat’ it to sign the former AS Roma man. Thomas Tuchel’s man ‘considers that it is time to leave’ the Champions League winners and join the Spanish giants. 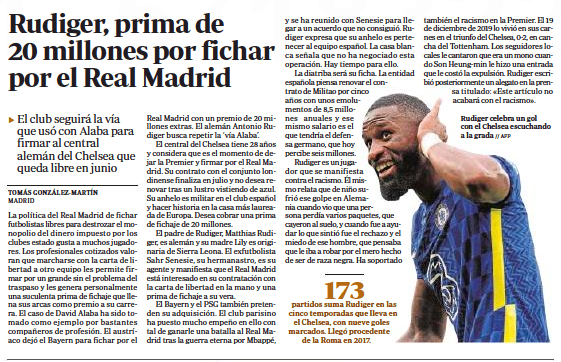 It’s claimed Rüdiger has decided not to renew his contract at Stamford Bridge as his idea is to arrive at the Bernabéu and ‘charge a transfer bonus of €20m’.

PSG are interested in the centre-back and have already met his brother, Sahr Senesie, who is also his agent. However, the two parties couldn’t find an agreement because the player’s desire is to sign for Real Madrid next summer.

Ancelotti’s side, for their part, indicate they have ‘not negotiated this operation’ and ‘there is time for it’.

They plan to offer a new deal to Éder Militão, which includes a salary of €8.5m per year. ABC explain Real Madrid plan to offer the same deal to Rüdiger, who currently earns €6m at Chelsea.

Whether that’s enough remains to be seen, but if they include that €20m signing bonus, they might have a good chance.