Sevilla have managed to build their strength in Spanish football over the past decade by buying and selling well. Without the finances of some of their rivals, they’ve had to make money in the transfer market, and Monchi has been key in that.

He left for AS Roma in April 2017, but things didn’t work out well with the Italian club and he was back at Sevilla two years later. A couple of months later he secured the signing of Diego Carlos from French club Nantes, and now the defender could be sold for a huge profit.

Liverpool have been the English club most linked with the Brazilian, and there’s been claims of interest from Manchester City as well. Monday’s edition of AS reports Carlos is aware of ‘dizzying offers’ for him, however, no club has shown willingness to pay his release clause.

AS say interested clubs, with Liverpool, Bayern Munich and Manchester City named, have been referred to the €75m clause, yet that doesn’t mean Sevilla wouldn’t accept less. They’re willing to enter negotiations as long as €75m is seen as the level to approach. 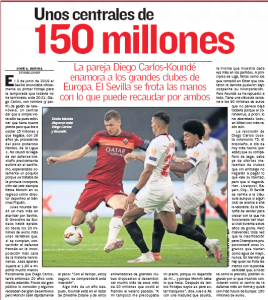 This fits in with their philosophy of selling to grow, reports AS.

Just how far Sevilla would be willing to drop from the €75m isn’t explained, and given Liverpool’s cautious approach so far this summer, it would have to be a significant decrease.