It was also stated Jose Mourinho’s side and others are providing ‘strong competition’ for Lyon, and Manchester United could come into the picture ‘in the coming days’.

That was it, but the Catalan media twisted it hugely. There were claims in the following couple of days that RMC said there’d been an approach, that United were going to make an offer, but none of that had actually been stated.

It was easy to brush off all the claims, because the Catalan media referred back to RMC.

Sport claimed Manchester United had telephoned Barcelona to transmit their interest and had asked for time to formalise their proposal. There was no mention of RMC, so this was either new information or nonsense, depending on what supporters choose to believe.

They continue the claims on Sunday. 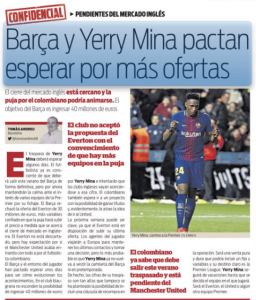 Everton are said to have made an offer, but Barca and Mina are waiting to see if Mourinho’s side come in. Barca now have growing confidence they can get €40m and hope that ‘English clubs are approaching’ that figure.

The Catalan newspaper states: ‘The Colombian also hopes to go to a project with the possibility of winning titles and, evidently, he is attracted by the idea of ​​going to United.’