Prior to selling Emiliano Martinez, Arsenal had a very strong goalkeeping department. The Argentine showed his quality whilst in the place of Bernd Leno, and hoped that he’d be able to be the club’s first choice, after many years with the Gunners.

Mikel Arteta decided Leno would be his man, and that saw Martinez move to Aston Villa, where the Argentine has seriously impressed this season.

Arsenal then signed Rúnar Alex Rúnarsson, and the Icelandic goalkeeper hasn’t shown he has the level to be anything comparable to Martinez as a back-up option. That’s seen Arteta suggest a move for a goalkeeper in the winter market, and several names have been linked.

One of those is Neto, with Saturday’s edition of Sport reporting there’s ‘insistence’ from England that Arsenal are keen on signing him this month. 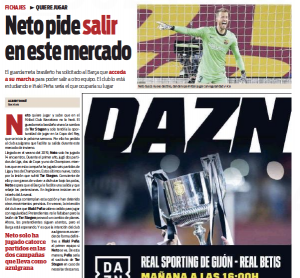 There’s good news and bad news for the Premier League club in that regard. Sport report Neto ‘asks’ to leave Barcelona this month, which is obviously a positive.

However, it’s because he’s looking for minutes, and given Leno is clearly Arteta’s first choice it’s unlikely he’d find those minutes at the London club.