After months of rumours and claims about a deal being imminent, last week Barcelona announced they’ve agreed a deal to sign Emre Demir from Kayserispor.

That transfer will cost Barcelona €2m plus potential bonuses payments, but they can pay more to make sure they get Demir earlier.

Mundo Deportivo report comments from Berna Gözbası, who is the president of Kayserispor, and he’s said that Barcelona can take his player earlier.

Mundo say Demir ‘could arrive in January’, with Gözbası saying that would be possible as long as the Blaugrana pay a further €500k to the Turkish club. 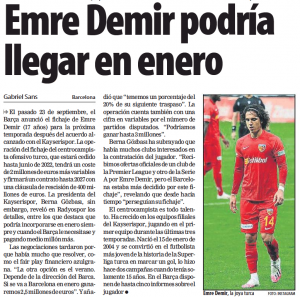 The Kayserispor president also said Barcelona had beaten interest from several other clubs, insisting there was interest from the Premier League, and he added that his side retain a 20% right over a future transfer.