The left-back’s current deal at Camp Nou runs down in 2020 and Barcelona president Josep Maria Bartomeu admitted the club are working with him over a long-term contract.

A ‘Top Secret’ report from Mundo Deportivo claims the defender’s representative met the leaders of the La Liga winners last week, when they agreed on the length of the deal – a five year contract.

However, Alba is not satisfied with the salary offered to him as he has seen the likes of Lionel Messi, Luis Suarez, Sergio Busquets, Ivan Rakitic, Gerard Pique and even Samuel Umtiti being handed better deals.

The 29-year-old is aware that he has ‘aroused’ interest from Manchester United and Juventus with his impressive displays and the two clubs are ‘very aware’ of his situation at the club.

So far there is no agreement over a salary between Alba and Barcelona and the Blaugrana are of the belief that despite interest from the Red Devils and the Serie A outfit, the fullback will commit his future to the club by signing an extension. 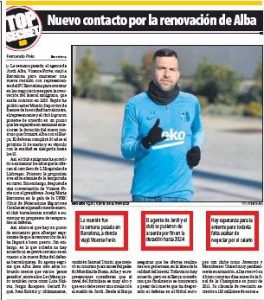 Over the past few years, agents have linked their clients to United in order to put pressure on clubs to offer them a better deal.

This could possibly be another case where Alba’s camp is using Manchester United links to pressure Barcelona to earn a better contract.

Because a move to England, and even a Barca exit, seems unlikely at this stage.