The PSV goalkeeper is annoyed enough for De Telegraaf to publish a big feature on his situation in their Monday edition.

Aware Crystal Palace, Newcastle United and Benfica are keen to sign him, Zoet believes PSV have gone back on a verbal agreement to sell for a fair price.

He’s already missed the Benfica chance, although in Portugal it was repeatedly stated that Crystal Palace would put up too much financial competition. Newcastle United have been linked with several goalkeepers this summer, and De Telegraaf’s report marks Zoet out as a serious consideration.

Zoet believes that when he extended his contract in 2015 there was a verbal agreement he could leave for a reasonable price. Whilst Crystal Palace and Newcastle have been led to believe €5-6m could do it, PSV are actually asking for around double that. 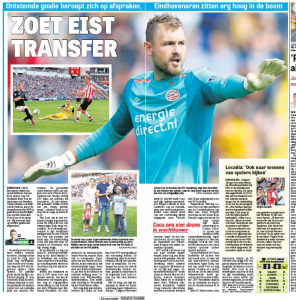 That’s blocking the 26 year old’s move, and is the reason for the player’s annoyance.

It’s unclear if Crystal Palace and Newcastle interest has been based solely on a cheap price, and whether that potentially going to double figures has killed their interest.

Either way, Zoet would like his club to bring the price back down and not make a transfer difficult.