Prior to signing the Spain international, the Gunners were also looking at Espanyol’s Marc Roca, claims Sport.

With football across major European leagues suspended due to the Coronavirus outbreak, Espanyol are set to suffer financial losses.

It would be even worse for them if the season is resumed as there’s a possibility of Espanyol [20th in the table] dropping to the second division.

Therefore, it’s plausible the La Liga side could raise funds by allowing a few of their players to leave and Roca is one who ‘has all the numbers to go out’.

It’s claimed the 23-year-old is the first option to replace Ceballos at the Emirates and Roca is aware of the Gunners’ interest in him.

In addition to this, the player ‘already has’ an offer from Arsenal ‘under his arm’ and the two clubs are now waiting for the Covid-19 crisis to end to start transfer negotiations. 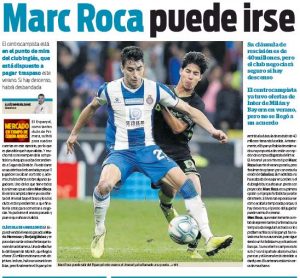 Sport adds Mikel Areta’s side are ‘determined’ to take the step to sign the Espanyol midfielder.

Roca has a €40m release clause in his contract, but Espanyol are ready to negotiate a fee for his sale, if they end up being relegated from La Liga.