Manchester City’s new signing Rúben Dias is about to fly to England, according to claims from Portugal on Monday afternoon.

Outlet Record reports the defender is at the Tires airport, and is taking a plane to Manchester ‘in the coming minutes’.

Benfica released the official numbers for this operation last night, stating that Ruben Dias is moving to the Premier League side in a €68m deal, with another €3.5m in possible bonuses.

Record didn’t give it a lot of attention in their morning edition, as they were more focused on the arrival of Nicolas Otamendi, who’s joining the Eagles in a €15m deal. 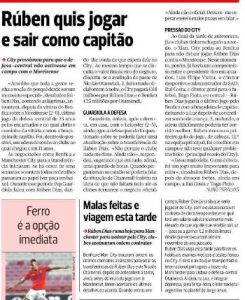 According to newspaper A Bola today, Manchester City didn’t want Ruben Dias to play against Moreirense on Saturday, when the deal was already done. But the Portuguese side had decided he’d have a farewell match for the club, and so it happened.

A Bola also claimed that the same plane which is taking Dias to Manchester will return to Lisbon with Nicolas Otamendi onboard.