Aleksandar Mitrovic has lifted himself as a possible Anderlecht signing for the January transfer window, according to Belgian newspaper Het Nieuwsblad.

Rafael Benitez explained on Saturday that he’s finding it difficult to fit Mitrovic into his playing style in the Premier League, with the emphasis on counterattack meaning a quicker forward is the better option.

That leaves Mitrovic with a problem ahead of the World Cup, knowing he needs to get games to be sharp for Serbia, and to be seriously considered as a starting option for his country.

Het Nieuwsblad say what had seemed impossible not so long ago, is now more likely because Mitrovic is pushing for things himself. The 23 year old is against a move to Turkey or Russia on a permanent transfer and now ‘insists’ he wants a loan move in the winter window.

Anderlecht are said to be an ‘acceptable’ destination, and good contacts are already in place. That said, Het Nieuwsblad make it clear that signing the Newcastle striker doesn’t seem a priority right now for Anderlecht, and there’s also concern the Magpies would want a purchase 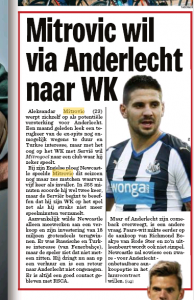 guarantee at a high price.

Mitrovic’s wish for a Newcastle exit on a loan basis was carried across the Belgian media on Saturday, with several outlets pushing the same story.

Het Belang van Limburg, DH and Het Nieuwsblad often carry the same stories, with DH being for the French language audience in Belgium, but that it’s made a big deal of across all three suggests there’s a good line of information behind the claims.