Manchester City’s ambition of winning the Champions League is yet to come to fruition.

Having appointed Pep Guardiola as their manager in 2016, the Citizens have won all the domestic competitions in England.

The Etihad club lost to AS Monaco in the round of 16 in the 2016/17 season, and they were knocked out in the quarter-finals by Liverpool and Tottenham Hotspur in the last two seasons.

City defender Aymeric Laporte has given a lengthy interview to Spanish newspaper AS, and the centre-back was asked if the club’s failure to win the Champions League is a ‘thorn’ for his side.

He said: “That’s right. We have been talking about it for a long time, it is what we lack. Last year we won four titles in the same season and we missed the Champions League. If it’s our turn this year, perfect.”

When further quizzed on what Guardiola’s side are lacking to win the Europe’s elite club competition, the Frenchman explained: “I don’t know, the team is similar. Home goals have been key. Last year we scored the same goals as Tottenham and were eliminated.”

“We have everything to be able to do great things. The squad is very committed, you don’t have to change much, just need a little more luck. We’ve missed that final spark that we will surely achieve.”

City can seal a berth in the last eight of this season’s Champions League, if they overcome Real Madrid. They have a 2-1 advantage from the first leg, and the return leg will be played in Manchester on Friday.

The English side have conceded only six goals at home in all competitions in 2020, and only one in their last seven matches. Real Madrid need to score at least two goals to progress further in the Champions League. 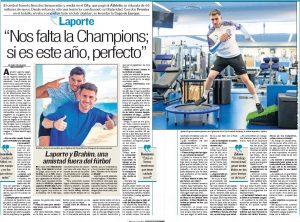 Despite their impressive home record, Laporte believes the clash against the La Liga winners will not be easy.

“We have a very big game, recently we have been very good and we have to continue in this line. It will not be easy with Real Madrid,” Laporte stressed.