Home Europe Player admits he would have been ‘crazy’ to turn down Watford opportunity...
SHARE

Impressing on loan with Fortuna Dusseldorf in the Bundesliga, Dodi Lukebakio doesn’t regret his decision of asking Watford to loan him out for the season.

Only making one appearance during the second half of the last campaign with the Hornets, the winger quickly realised he wouldn’t get the time he needed at Vicarage Road under Javi Gracia.

Securing a move to German fairly quickly, the Belgium U21 international has 12 goals and five assists to his name in 27 appearances in all competitions so far this season.

Only 21, Lukebakio has already played in four different leagues, which he believes shows exactly who he is.

He told La Meuse over the weekend: “It means I’m someone who never gives up! I’m a fighter, an ambitious person too. That’s what I insisted to be loaned out by Watford in the summer. You can criticise me for that too, but when it pays off, people tend to salute me being opinionated.” 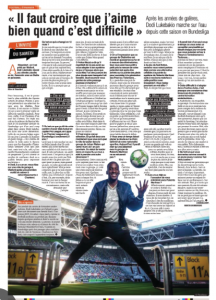 “However, I remain aware that I’m still nowhere. The hardest is yet to come. Today, for example, I have two people on me at all times. It shows they’re aware of what I can do, but it also means I need to adapt.”

Swapping Charleroi for Watford towards the end of the 2018 January transfer window, Lukebakio has no regrets over his decision, even if he might not be in the Hornets’ plans going forward regardless of what he does in Germany.

He explained: “When you’re 20 and a club like Watford in the Premier League are pushing to sign you, you would have to be crazy to turn it down. I’m like the others, I just went for it, but in football, everything needs to be quick. When you sign for a club, you need to show what you can do straight away. Otherwise, it’s onto the next one.”

It remains to be seen what the future holds for Lukebakio, but surely it must be hard for Watford to ignore his performances with Dusseldorf.

If they don’t want to use him, they’ll have to sell him, and it’s probably a win for them either way.