Home Europe Player had adaptation problems at Fulham, leaving in the summer
SHARE

Portuguese newspaper Record continues to report Sporting’s pursuit of Fulham striker Luciano Vietto today. The Spaniard, who’s loaned from Atletico Madrid until the end of the season, should soon be leaving Craven Cottage.

Following reports that Sporting found an agreement with Atletico Madrid to receive €20m plus Vietto in exchange for Gelson Martins, it’s claimed the Lisbon side are now worried about the attacker’s salary.

Record says Vietto currently makes €2.1m net per season, and that’s more than any Sporting player. That’s why they will have to sit and negotiate to have him for next season.

The outlet writes that Vietto’s bad season for Fulham reflects the club’s poor form, and with the relegation almost guaranteed, he’s not staying for longer. It’s claimed he’s had problems with his adaptation to English football as well, and that’s why his loan spell didn’t work out as expected. 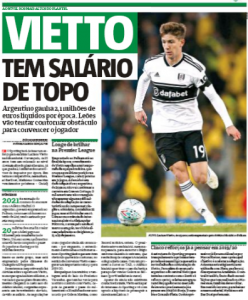 Sporting are still to open negotiations with Vietto, and Record claims that the player likes the possibility of moving to Lisbon in the next season.

Since joining Fulham last summer, the Spaniard has scored only one goal in 22 matches for the club.