Stoke City had such high hopes for Jese Rodriguez that it even seemed unrealistic at the time.

It was like the Premier League club hadn’t watched Jese since he left Real Madrid, and had been completely naive to his actual situation at both PSG and Las Palmas.

The French club were suggested to have regret over the transfer pretty much straightaway, with Jese acting liking a superstar from his presentation onwards.

Having reportedly annoyed Real Madrid by launching himself as a pop star and being determined to ‘fight for his dream of being a star of reggaeton’, accompanied by a raunchy music video, the PSG move was a chance for a fresh start.

It was a disaster and then Middlesbrough tried to sign him, but despite Aitor Karanka’s best efforts to throw himself in the way, they dodged the bullet. Jese then moved to Las Palmas on loan, arriving like the reggaeton star he wants to be, and despite some flashes, failed to produce.

Got a terrible feeling about this video.https://t.co/og5b3o1NrU

Now he could be going back. Las Palmas are bottom of La Liga and determined to have a 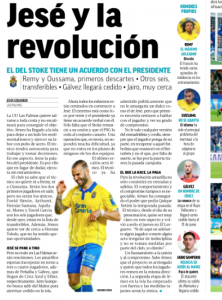 last throw of the dice in January to save themselves.

The Stoke player is said to be ‘like crazy’ for the move and has already reached a ‘verbal agreement’ with the club’s president.

Now all it needs is for Stoke to agree to let Jese go, and for PSG, who are keen to sell the player permanently, to agree a loan with Las Palmas.