The Catalan press are among the best around at holding grudges, and a target for Friday’s edition of Mundo Deportivo is Middlesbrough’s Adama Traore.

Adama left Barcelona in 2015 to sign for Aston Villa, and his first season in English football didn’t go well at all, ending in relegation.

In the summer Aston Villa sold Adama to Middlesbrough and the 21 year old is progressing well, but Mundo Deportivo have taken some snipes at him in an article about Ezekiel Bassey.

Bassey, 20 years old, has joined Barcelona B on loan from a Nigerian academy, with a view to a permanent deal. The newspaper somehow turn their Bassey article into an attack on Adama and his exit to Aston Villa.

Comparing the quality of the two, it’s stated that Bassey will surely have the ‘patience’ 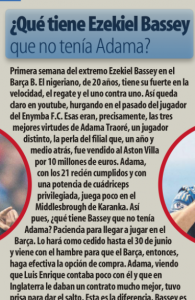 which Adama lacked. The Middlesbrough youngster is said to have been in ‘a hurry to jump’ when Aston Villa ‘offered a better contract’.

Bassey’s job is now to show he’s got that quality which Adama lacked, the ‘hunger’ to play for Barcelona.

It’s all a little unfair, Adama’s time at Aston Villa didn’t go well, but now he’s playing Premier League football. If he was still at Barcelona he’d almost certainly be in the B team or off on loan at some side not greatly concerned with his development.

Should Adama fulfil his potential, then the Catalan slant will be that it’s because of the great schooling at La Masia, but if he fails then it’ll be because he went for Aston Villa’s money.