Something we love in the Italian press is when they start setting percentages of chances that players have to join some new club in the transfer window.

This Tuesday, Tuttosport brings a list of players who have been attracting interest from Juventus, with the Old Lady getting pretty good odds in signing all of them.

Arsenal are mentioned in one of these cases, which is Joachim Andersen. Tuttosport says the Gunners, Borussia Dortmund, Valencia, Sevilla and Juventus are all after him.

Regarding the percentages, they give 35% to Borussia Dortmund, 30% to Arsenal, 25% to Juventus, 5% to Inter and 5% to Roma. That is, they completely ignore the interest from Spanish clubs which they had just listed. 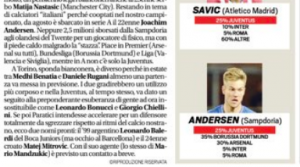 Signed by Sampdoria from FC Twente in a €1.4m deal in 2017, the defender is obviously worth much more now, not only for his performances, but especially for all this competition for him.

Last week, the Italian press claimed that he should cost between €25m and €30m, and Arsenal have been linked before.