Home Europe PL duo ‘do not convince’ Everton man – Has ‘many offers’ in...
SHARE

Everton’s Moise Kean has turned down approaches from the likes of Fulham and Nottingham Forest as he eyes a return to Paris Saint Germain.

That’s according to Corriere Dello Sport, who back up the idea the striker could be used by Juventus to get midfielder Leandro Paredes.

Kean is currently on a two-year loan deal with Juventus, but they are not keen to keep him and would prefer to ship him out this summer.

That requires an agreement with Everton, who have so far refused to negotiate the current deal with the Italian giants.

That’s already seen them take €3m for the loan last season, and they’re set to pick up €4m for next season before Juventus are obliged to pay a €28m purchase fee.

It was suggested this week that Juventus may simply pay that €28m fee this summer and then do a swap deal with PSG for Paredes, a transfer that would suit both clubs.

Corriere say this is a possibility, with the Everton loanee a potential ‘key’ to unlock Juventus’ efforts to get Paredes.

According to their information, Kean has ‘many offers’ around Europe and Premier League newcomers Fulham and Nottingham Forest are among those who are keen. 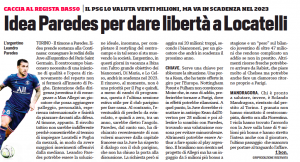 However, both of those clubs ‘do not convince’ the Italian, who, if he has to leave Juve, would prefer to return to PSG and ‘actually relaunch himself’.

If that were to happen, Juventus would have to buy Kean from Everton for the €28m fee that’s due to come into effect at the end of next season. There is no mention of the €4m loan fee for next season, but you would assume the Toffees may want that as well.

Either way, Kean will not be reuniting with Marco Silva at Fulham or moving to Nottingham Forest, two clubs he seems to think are below his level at this point.