The club’s president Jacques-Henri Eyraud has recently been saying, both in public and private, that stars won’t be sold off, but L’Equipe dismiss that and point to Marseille’s ongoing battles with finance.

As has been the case for some time, when the French club want to sell a player they look first to the Premier League market. They’ve taken on officials to concentrate solely on this, as it’s believed English clubs pay the best transfer fees.

Morgan Sanson is one player to have been of interest, yet that was to clubs such as Crystal Palace and West Ham, and the player wouldn’t be tempted by such a move. Super agent Pini Zahavi has been dragged in, and tasked with ‘opening doors’ to bigger clubs, with those named as Arsenal, Tottenham and Everton. 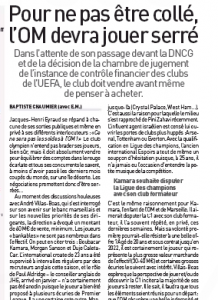 Sanson would be fortunate to interest the Gunners or Spurs, and Everton would likely be more around what he could aspire to. That could prove a problem, because he fancies playing in the Champions League for the first time in his career, something Marseille have qualified for.

But even so, Everton may not be willing to take the bait. Zahavi and Paul Aldridge may be able to bend the arms of clubs like West Ham over transfers, however, they’d surely not find it so easy to oversell a player to Marcel Brands and Everton.

Maybe Newcastle United would be a better target.

Player set for ‘first part of medical’ to join Liverpool –...

Club ‘in talks’ with Manchester United over late OT exit –...