We’re fully in that stage of the transfer window when anything can be used to add to a saga. Gazzetta dello Sport today claimed that Leonardo Bonucci celebrating a toast last night with his friends could have hinted toward a Manchester City move.

Spanish newspaper Mundo Deportivo today made a big deal out of Paul Pogba posting a photograph of himself wearing white, suggesting it could be Real Madrid related.

And now, Manchester United fans have been squinting at the background of a photograph published on Twitter by Jose Mourinho’s wife. 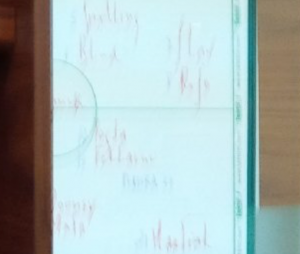 The photograph appears to be in Mourinho’s personal office and there’s a tactics board in the background, fans have zoomed in and think they can see the word POGBA.

There are various players marked out in positions on the board, with their understudies written underneath.

Manchester United fans quickly started tweeting that they could read the Frenchman’s name.

There’s as much disagreement as there is insistence, as fans get to the end of their Pogba tether.

@utdreport @MourinhoMatilde I CAN READ POGBA THERE WITH FELLAINI UNDER HIM

One Manchester United fan had the very good idea of darkening the image, which seems to have convinced people even more.

All the fun and games of the transfer window!