When Juan Foyth was moving from Estudiantes to Tottenham in 2017, El Dia was the newspaper which seemed to get the best information.

PSG were also seriously interested in the defender but Foyth himself had a liking for Tottenham. It took a while for a fee to be agreed between the Argentine club and Spurs, and at various points it was claimed PSG had it all sewn up.

Foyth himself was hanging on for the London club, wanting the chance to play for Mauricio Pochettino in the Premier League.

At the time Foyth was being presented as a future central defender for the national team, and he’s set to be called up by Argentina… reports the very same El Dia. 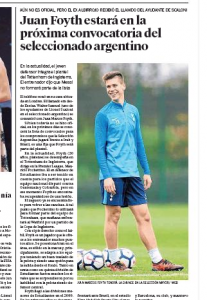 The newspaper states in dramatic style ‘The phone rang at his house in England’ and explains Walter Samuel, an assistant to interim boss Lionel Scaloni, broke the news.

It will become official ‘in the coming days’ and the Tottenham player will be in the squad for the matches against Iraq and Brazil.