By now, most people know the situation surrounding Dusan Vlahovic at Fiorentina.

The Serbian striker has been in fine form for an underperforming side, which has caught the eye of many teams, and with a current contract set to expire at the end of the 2022-23 season, the Serie A club are thinking about renewing his deal.

However, the likes of Manchester United and Manchester City keep getting linked with him, which has certainly made things a bit more complicated for Fiorentina, who want to keep hold of their star for a bit longer.

Corriere dello Sport look at the situation, explaining that a number of clubs have reached out to the player’s agent, Darko Ristic, regarding Vlahovic’s ability.

So much so, in fact, that ‘his phone is boiling’, with both Manchester United and Manchester City named alongside Liverpool and Real Madrid as the interested parties showing ‘expressions of interest’. 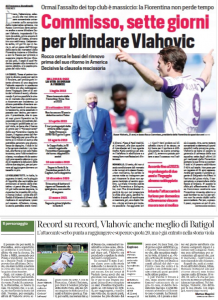 While it appears that Edinson Cavani could be staying an extra year at Old Trafford, there will be a need to replace the Uruguayan sooner rather than later, with Vlahovic able to provide a somewhat similar profile in the long run.

As for Manchester City, they will someone to take over from Sergio Agüero when the Argentine leaves at the end of the season, and the Serbian would offer Pep Guardiola something different to what he already has in Ferran Torres and Gabriel Jesus.

Regarding the price, Corriere dello Sport don’t provide an idea, but Corriere Fiorentino do, claiming it would take ‘at least €50m’ to prise him away from Florence.