When Bild go with a story shouting HITLER from the headline, it’s generally not going to be a good thing.

The German media are in something of an open war with the Aubameyang family over the Arsenal saga and, as we pointed out yesterday, it’s starting to wear a bit thin.

Pierre-Emerick Aubameyang is a character and has been for years, and it’s not always to the benefit of his club and teammates. His family have been given special treatment by Borussia Dortmund on repeated occasions, allowed to turn up to events they probably shouldn’t be at, and basically hang around as his entourage.

This was largely indulged and seen as part of Auba’s wacky persona, but it’s all gone very sour now Arsenal are in town. The striker has been behaving badly recently and deserves criticism for that, but the theme in the German media is going at least a little over the top. 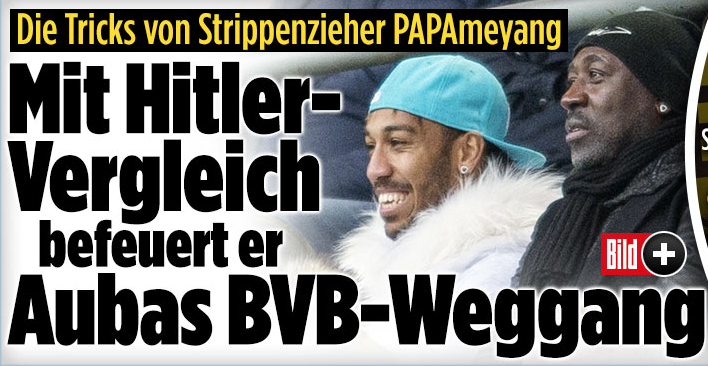 This week’s edition of SportBild had something of a hatchet job on the player’s father, dubbed the puppet-master. Going over the huge salary the German media reckon Arsenal are offering (€20m a year) it was added ‘the father also collects heavily’.

Pierre Senior is his son’s agent, so of course he’ll benefit from the transfer, as do agents of other players, when moving both in and out of Germany.

Today Bild take it a step further and say Pierre Senior has been up to ‘tricks’ to force the transfer. The German newspaper say the 52 year old has ‘great influence on the decisions of his youngest son’.

Again, well he would, he’s his father and works with him. Bild state ‘The head of the family is the driving force behind the transfer to Arsenal – and partly responsible for the change of heart of his son.’

That’s all normal transfer snipes, but what seems to have really irritated some German journalists is a Hitler reference recently made by Pierre Senior. Bild say there was a ‘completely inappropriate Hitler comparison in the direction of a German journalist who had called Aubameyang’s unacceptable behaviour a “monkey circus”.’

After a German journalist had used the ‘monkey circus’ claim, the father snapped back via Instagram with: “I have the impression that he wants to bring us back to the Hitler era.”

The German for ‘monkey circus’ is Affenzirkus. Affen is Germany for monkey, there’s no getting away from it.

Not for one minute would we suggest there’s been any racist intent with the use of the word. From what we can gather the word is used in Germany to explain a madhouse, some crazy mess. Another clarification we found explained it as a ‘charade’, but also said it could be seen as ‘monkey business’.

The Kicker journalist involved apologised: “It was never my intention to offend or discriminate against the player Aubameyang or people in any way.”

Aubameyang and his father were offended, and angry, hence the Hitler comment, but it must be said that Hitler post has now been removed from Pierre Senior’s Instagram.

If on one hand people should accept the journalist apologising and clarifying, then on the other they also have to accept Aubameyang’s father was probably furious and then deleted the post afterwards.

But whilst Bild want to dismiss the ‘monkey circus’, they’re happy to still go on about the Hitler comment, using it in a headline, shouting it out, more than a week later.

The German newspaper’s headline is ‘With Hitler comparison he fired
Auba’s BVB departure’, above it ‘THE TRICKS OF STRIPPENZIEHER (Puppet-master) PAPAMEYANG’.

The insinuation is offence was somewhat feigned, but it doesn’t take much to believe there was genuine offence taken whether intended or not. Aubameyang and his father aren’t German, it’s not their language or culture, and with ‘Affenzirkus’ literally meaning ‘monkey circus’, it’s got to be understandable if offence was taken.

Perhaps Bild and the German media need to have a think about their current stance on this potential Arsenal transfer, because from here it’s not looking too good.