Despite Manchester City’s claimed efforts to sign Miralem Pjanic this summer, the midfielder has chosen to stay at Juventus, and should now be rewarded with a new contract at the club.

As reported by Italian newspaper Gazzetta Dello Sport today, the 28-year-old is ready to sign a new deal with the Old Lady.

The extension should run until 2023, and his salary will increase from €4.5m to €6.5m per year after tax. That leaves him only behind Cristiano Ronaldo and Paolo Dybala on the payroll.

Regarding the Premier League Champions, the newspaper writes that Pep Guardiola has personally 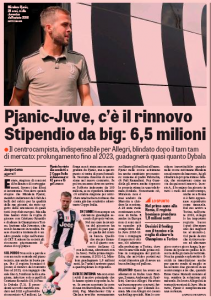 called the player to say he wants to count on him.

Pjanic, however, has decided he wants to stay at Juventus, where he’s already adapted, and wishes to keep fighting for major titles there.

That’s why he’s committing his future to the club, at least for now.