Home Europe Pep Guardiola ‘only has interest’ in one player, Man City willing to...
SHARE

One of the more sensible Manchester City rumours of recent months has been the club’s interest in Rodri.

With Fernandinho now 34 years of age, it’s quite clear the Brazilian can’t carry on for much longer, yet when he’s not on the pitch he’s clearly missed by the Premier League champions.

Atletico Madrid’s Rodri has been described as Spain’s natural successor to Sergio Busquets, and who wouldn’t want that at their club?

Today’s edition of Marca takes a look at potential Atletico Madrid transfer business this summer. Nicolas Otamendi gets a mention for the defence, although it’s again pointed out his wages are way too high. The dream would be Ruben Dias, however, the ‘greats’ of Europe want him. 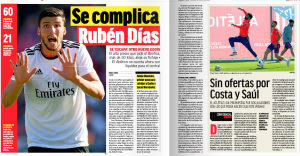 As far as Manchester City being keen on Atletico players, Pep Guardiola ‘only has interest’ in Rodri. Previous claims about Saul were very quickly rubbished.

Not only is there interest in Rodri, there’s also a desire to pay the player’s €70m release clause, and then Atletico could do nothing about an exit.

It would all come down to what the midfielder wants to do.