On Wednesday night, Marca published an image of their front page for Thursday.

Isco was plastered across it and it was claimed Pep Guardiola insists on the player’s signing for Manchester City, seeing the Spaniard as an ideal replacement for David Silva.

Coincidentally, this came just hours after Silva himself announced that next season will be his last in the Premier League.

The actual Marca report can be broken down into:

He wants to stay at Real Madrid, who have valued him at €80m.

The City boss has always held the player ‘in high regard’.

City considered a move for Isco before Zinedine Zidane returned.

Guardiola has ‘not forgotten’ him.

The manager sees the 27 year old as a ‘pillar’ for the next City team without Silva.

Real Madrid need some money in.

Isco really wants to stay (reiterated) but City wouldn’t be such a bad option. 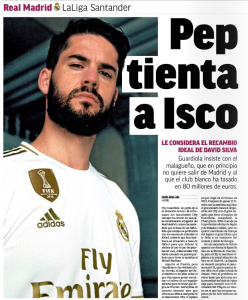 It can be pretty sure that if David Silva hadn’t made his announcement, this article wouldn’t have been published in the way it has.

Rather than genuine information, this all very much feels like combining Manchester City’s reported long term interest, and the Silva situation, as well as Real Madrid’s desire for some money.

That doesn’t mean it’s ruled out, just that this report on its own isn’t exactly a leap forward.