The Italian media is now sounding quite sure that Manchester City will work to have Ivan Ilic back at the club at the end of the season.

Currently having a loan spell at Hellas Verona, the midfielder has been impressing in Serie A, and his future has become an interesting topic this week.

Back on Wednesday, we covered Hellas 1903 explaining the situation and showing that even though the Italian club have a €12m buying option over the player, Manchester City also have the chance to sign him back for €24m.

So despite having to spend a few million, the Premier League side would have the right of counting on Ilic in the future. 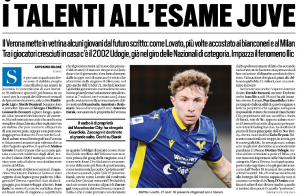 Now many of Hellas Verona young players are highlighted by newspaper Tuttosport today, and Ilic is one of them.

The outlet points out that Manchester City manager Pep Guardiola is now ‘bewitched’ by the midfielder, and the result of it is that he should bring the 19-year-old back to England in the summer.

Tuttosport doesn’t even mention the buying option or other clauses. They just point out that Hellas Verona manager Ivan Juric is ‘the first to know’ it will be ‘almost impossible’ to hold the player for longer, as the teenager should soon be on the way back to the Premier League side.

So even though it’s sounding likely that Ilic is returning to Manchester City, it’ll be interesting to see if the clubs will really need to arrange a whole new agreement for that to happen.