Home Europe Pellegrino with another job opportunity after Southampton, could be appointed this week
SHARE

Mauricio Pellegrino isn’t short of interest following his exit from Southampton. The manager arrived in the Premier League with great hopes attached, after the Saints turfed Claude Puel out.

It didn’t go to plan and Southampton had to change their direction and appointed Mark Hughes to save them from relegation. The Welshman achieved it, just, and is now expected to sign a longer term contract with the club.

Pellegrino was first targeted by Universidad de Chile, who initiated contact to see if they could reach an agreement. There was an acceptance in South America that it was always going to be difficult, with the manager expected to prefer another European adventure.

That led to interest from Leganes, and Spanish newspaper AS report the La Liga club have been in talks for two weeks with Pellegrino, trying to reach a financial agreement. 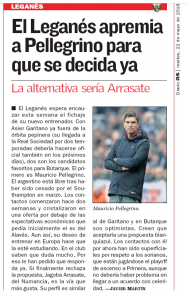 Leganes have gone in with an offer lower than Pellegrino’s initial financial demands, and want a quick answer. Should that be positive then the manager could be appointed this week.

If the former Southampton boss knocks it back then AS say Leganes will move on to Jagoba Arrasate and other targets.