Jürgen Klopp may think that Divock Origi deserves to be remembered as a Liverpool legend for all his important goals from the bench for the Anfield side, yet few would begrudge the Belgian a transfer away from Merseyside if it presented itself.

After all, the 26-year-old remains a backup to the likes of Mohamed Salah and Sadio Mané, which can be seen in the measly 38 minutes of football handed to him in the Premier League.

That’s why, if Juventus come knocking, he would be expected to take it, as the Serie A side start their plans to bolster their attack, with or without Alvaro Morata.

The news comes from Gazzetta dello Sport, who explain Juventus aren’t expected to trigger the €35m clause in the loan deal with Atlético Madrid to make the move permanent, while the player himself is said to have an agreement with Barcelona. 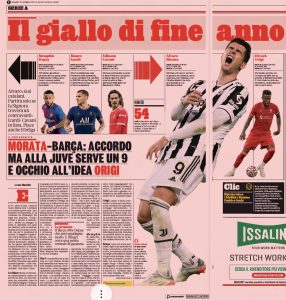 While other names are circulating to replace him directly, Gazzetta point out we should ‘pay attention’ to the Liverpool forward, as Juventus have ‘taken the first steps to get information about him’ for a potential January move.

However, it’s made clear that they don’t see Origi as an out and out striker like the others, but more as someone who could complement Morata should he remain in Italy.

In fact, there’s almost a certainty about the interest, because the newspaper write that should the player write a biography down the line, ‘he risks having to talk about Juventus’ in the final chapters.