Jupp Heynckes is set to leave Bayern Munich at the end of the season, despite the club’s very public efforts to convince him to stay around for longer.

The 72 year old first took charge of Bayern Munich in 1987, and has been manager of the club in four different spells. Considered very much a safe pair of hands, many at Bayern would have liked another season out of the manager, but he continues to insist that won’t be happening.

Speaking to SportBild this week, the Bayern chief made his position clear once again and was asked about potential candidates to take over from him, with Jurgen Klopp brought into the picture.

The German magazine put it to Heynckes that Klopp meets the criteria Bayern Munich would be looking for, and he replied: “He does a good job in Liverpool, where there is a tremendous level of ambition and many critics. He has changed a lot there, given Liverpool clear outlines and led them on the road to success. The passion and power there bears his signature.”

That was very much sitting on the fence from Heynckes, and it’s clear he doesn’t want to outright suggest Bayern move for the Liverpool manager. 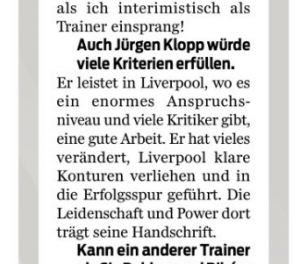 Klopp has unfinished business at Anfield, and the timing doesn’t appear right for him to take over at Bayern, even if his Borussia Dortmund background is seen as no barrier in Germany.

Much more likely to get the job is Thomas Tuchel, and Heynckes said he feels the manager has what it takes for Bayern Munich.