While that might not come as a surprise, since they always seem disgruntled when something doesn’t go Barcelona’s way, this time, they think it’s personal.

You see, Barcelona wanted Marquinhos from Paris Saint-Germain last season, but the French club said no to their €50m offer for the Brazilian centre-back.

Now, the Catalan newspaper report the soon-to-be former Ligue 1 champions are ready to accept an offer from Manchester United, which is said to stand at €70m. 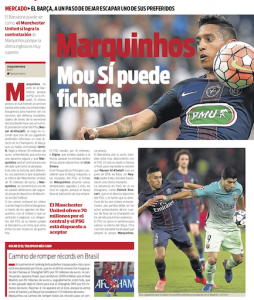 José Mourinho has made it very clear he isn’t exactly happy with either Chris Smalling and Phil Jones this season, preferring an Eric Bailly-Marcos Rojo partnership until the latter of the two got injured, and an incoming centre-back in the summer wouldn’t be a surprise.

Sport say Marquinhos will become ‘one of the pillars’ of the Special One’s second year at Old Trafford, and are seemingly insulted by the fact PSG would be willing to sit down and negotiate with Manchester United when Barcelona’s offer of €50m was met with ‘anger’ last year.

The reason behind this is partly down to the Neymar situation, when the French side were interested in bringing the Brazilian superstar, while the presence of a former Barcelona player (Patrick Kluivert) in a director of football role in Paris and their recent encounters in the Champions League have done very little to smooth things over.

These are big claims from Sport, but they’re also the first in their nature, so it’s worth just waiting a bit before getting excited/outraged at the thought of Marquinhos joining your football club.