Now that Nuno Espirito Santo has been announced as Tottenham’s latest manager, Fabio Paratici and Daniel Levy can focus on the transfer market.

They will, of course, listen to the demands of their new man in charge, but there are some targets that appear to be driven solely by the director of football, such as Takehiro Tomiyasu.

Clearly wanting to bolster the defence, the Italian has set his sights on the Japan international, who will represent his country at the Olympics in his home nation.

There has been talk of official offers already being made by both Spurs and Atalanta, which is corroborated on Thursday by Corriere di Bologna.

The local newspaper claim that once Santo is announced, which has already been the case, Paratici ‘will try to accelerate for the Japanese by increasing the first offer of €18m + bonuses’, which was ‘slightly higher’ than their Serie A competitors’. 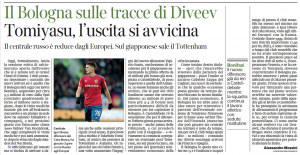 Atalanta will do the same, who, much like Tottenham, ‘know they need at least €20m + €3-4m in easily attainable bonuses to make Bologna capitulate’.

Therefore, ‘there is a feeling that the right offer may arrive soon’, perhaps even before the Olympics, which is why they are ‘starting to prepare a possible post-Tomiyasu’ at the club.