Andrea Belotti’s Torino contract expires at the end of June, and unfortunately for him it coincides with a season in which he’s only scored four goals.

Those goals have come across 15 Serie A matches, with the 28-year-old having two injury absences in the current campaign.

Tuttosport take a look at the situation, and explain Belotti now needs to be realistic about which clubs will want him, and they suggest he can no longer aim for the biggest sides in Serie A.

Tottenham are said to rate him, and it’s explained the duo of Antonio Conte and Fabio Paratici make Spurs more Italian and could therefore help the deal happen. If not Tottenham, Tuttosport say elsewhere in England Belotti would be looking at mid-table sides. 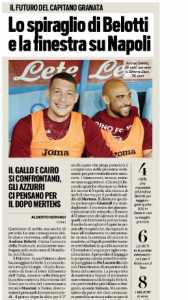 It’s very unlikely that Spurs would go for such a signing as a starter, and he’s hardly going to bench Harry Kane, or replace the Englishman should he leave. However, it may be considered that Belotti could be a back-up and someone to have a transfer gamble on.

Napoli are keen, but it’s reported the Belotti family aren’t excited by that move.