The managerial situation at Tottenham Hotspur is receiving coverage around the world, as the club stumble from one target to another.

Italy is inevitably giving plenty of attention to the saga, given multiple targets for the position have either been Italian or recently worked there.

Correire dello Sport have gone in heavy on Tottenham, and specifically their new Managing Director of Sport Fabio Paratici, especially when it comes to the treatment of Paulo Fonseca.

The Portuguese coach was thought to be just an announcement away from getting the Spurs job, before the club apparently changed direction and moved for Rino Gattuso instead.

Paratici is accused of betraying Fonseca, who was already lining up work with him.

Corriere dello Sport state: ‘This is a story of illusions, mockery, misdirection, deviation. A story that goes beyond the normal dynamics of the market.’

Gattuso leaving Fiorentina quickly saw Fonseca dumped, and the Italian newspaper explain that whilst there were likely disagreements between the coach and La Viola on transfers, it’s unlikely he wanted to enforce solely Gestifute (Jorge Mendes’ agency) signings on them.

Intriguingly, it’s explained Paratici and Fonseca spent two days together at Lake Como, ‘planning strategies and discussing every detail’. The director is said to have assured his new coach that Harry Kane would be staying at Tottenham, despite the player’s desire to leave.

Whilst this was happening, Fonseca’s agent, Marco Abreu, reached an agreement on a deal with Spurs, and started the process to get a work permit.

Then things started to falter, and according to Corriere dello Sport, the reason wasn’t tax related: ‘In reality, however, it is Paratici who changes course when he realises that Fonseca would like to play with his preferred form, the 4-2-3-1, and not with the three-man defence.’ 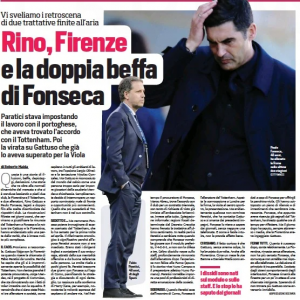 There was also disagreement on backroom staff, with Paratici said to have preferred a collection of people from Tottenham’s pool.

Still, when the pair left Como, it was thought that Fonseca would be manager.

Paratici then changed his mind, and Fonseca is particularly annoyed he wasn’t even informed personally, and the article states: ‘Fonseca learns about it from the newspapers, without even a phone call. And as you can easily guess, he doesn’t take it well at all.’