Manchester United are showing ‘palpable interest’ in Sevilla star Jules Koundé and could be about to scupper Chelsea’s plans to sign him.

That’s according to AS, who cover both of the Premier League side’s interest in the Frenchman and the prospects of a move in the January transfer window.

Koundé, as we’re sure you’re aware at this point, is one of the highest-rated defenders in Europe after establishing himself as a star for Sevilla in the last few years.

He was very close to a move to Chelsea in the summer when Thomas Tuchel’s side pushed to make a transfer happen but couldn’t reach an agreement with Sevilla, who were determined to ensure that his release clause was paid in full.

The Blues are not his only suitors, though, with Manchester United also having shown an interest in the past and been linked again following Ralf Rangnick’s arrival at the club.

AS cover that today and say Sevilla are ‘not taking it for granted’ that Koundé will stay at the club in January, with Manchester United showing ‘palpable interest’ in his signature.

They’re seeming ready to compete with Chelsea, who will be ‘back in the race’ for the French defender as well, something that has been reported elsewhere and is likely because of the contract situations of Antonio Rudiger, Andreas Christensen and Cesar Azpilicueta. 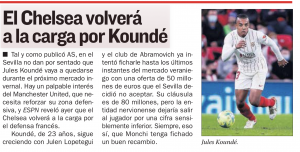 Both sides have been a boost, too, with Sevilla no long looking for the €80m release clause in his contract to be paid.

Instead, they are willing to accept a ‘significantly lower figure’ than that, although it is dependant on Monchi being able to find a ‘good replacement’.

Either way, they’ve lowered their demands considerably, handing both Chelsea and Manchester United the chance to battle it out for his signature next month.