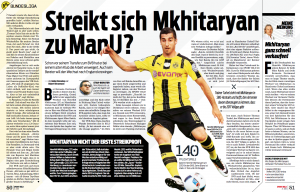 It’s all getting increasingly messy in Germany when it comes to Henrikh Mkhitaryan’s future at Borussia Dortmund, and SportBILD on Wednesday have a lengthy article looking at the situation, which we’ll happily summarise for you here.

As you all probably know by now, the Armenian forward is about to enter the last year of his contract, which, if he doesn’t renew with the Bundesliga club, would allow him to leave on a free in June 2017.

Dortmund, of course, don’t want that to happen (this brings back bad memories of Robert Lewandowski to Bayern), and are prepared to offer him a new four-year contract to keep him at the club until 2021.

Unfortunately for Dortmund, the player’s agent happens to be Mino Raiola, and, well, the Dutchman (yes, he’s born Dutch) tends to get his way when he wants one of his players to move.

Raiola claims there had been a verbal agreement between club and player that Mkhitaryan should be allowed to leave were a lucrative offer be made for his client, something Hans-Joachim Watzke, Dortmund’s CEO, vehemently denies.

Since then, Manchester United are said to have made an approach for Dortmund’s star (a move described by Raiola as a ‘dream’ for his client), and things have escalated rather quickly in the Dortmund offices.

SportBILD claim discussions between the Dutch agent and Dortmund officials grew into a full-blown argument, with Raiola allegedly even overturning a chair in frustration.

Speaking to the German magazine, the agent said: “Henrikh is not the type to have conflicts, he leaves that to me. We will not give up!”

This is where SportBILD warn Dortmund to take Raiola’s threats seriously, knowing full well what he is capable of.

For example, when Dortmund were interested in buying the player from Shakhtar, the player skipped the Ukrainian club’s summer training camp to force a move to Germany.

Guess who was blamed for that? Yep, Raiola.

The magazine state that, according to their information, Manchester United have made a €23m (£17.7m) bid for the player, which has since been rejected by Dortmund as the club prepare to force him to stay for an extra season and let him go on a free next year out of principle.

Thomas Tuchel, who managed to get the best out of the Armenian (23 goals and 32 assists in 52 appearances), has also made it clear to the club he cannot see the 2017 season without his star winger.

However, will their stance be the same if Manchester United turn around and up there offer to €40m (£30.8m) or more?

SportBILD aren’t so sure, and neither are we.