Home Europe ‘More outside than inside’ – Suggestion player closer to signing for Manchester...
SHARE

Gareth Bale came on as a second half substitute and scored two goals to help Real Madrid beat Liverpool 3-1 to win their third consecutive Champions League final. The first was a goal of a standard so high that Loris Karius had to make two howlers to overshadow it.

Following the victory in Kiev on May 26th, the Welshman expressed his unhappiness about not starting the final, especially considering the form he’s been since the end of April. Prior to the final, he had scored five goals in five matches in all competitions but, unlike Isco, doesn’t come with the added benefit of being Spanish.

Bale’s comments about his future have seen him being linked with a move away from Real this summer, with Manchester United naturally being the club linked most. He stressed that he should be starting regularly for Zinedine Zidane’s side and admitted that he will speak to his agent to discuss the future.

Catalan newspaper Sport claims the former Tottenham Hotspur star is “more outside than inside” at Real, despite Zidane and his club teammates showing affection towards him after the final in Ukraine. 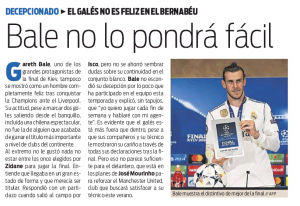 Manchester United have long maintained an interest in signing Bale. Sport claims the 28-year-old is a target for Jose Mourinho and is closer towards joining them. The report also claims the Red Devils will make an attempt in signing the forward, in order to satisfy Mourinho.

Of course, Sport are a newspaper of the Catalan variety and want to stir this one up as much as possible. Their first seven pages on Monday, just two days after the final, are a concentrated attempt to talk up a crisis at Real Madrid.