With the Reds looking to protect the 18-year-old, they’ve opened negotiations to extend the current contract, which runs until 2020.

Now today, two Portuguese newspapers have articles saying that the midfielder is actually extending his deal so he can leave Anfield on a loan move.

Record, who has the story on their front page, says it’s all ‘practically agreed’ between Liverpool and Sporting, so the player will stay in Lisbon until the end of the season. It’s claimed that the transfer, which is ‘imminent’, could be announced today. 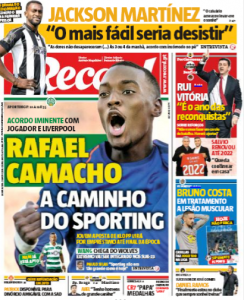 They claim that the loan can be extended to the end of the 2020 season, but that will depend on how much he’s used, and decided in the summer.

Record says that Liverpool and Camacho have agreed to a new deal which will run until 2023, therefore he’ll be well protected before leaving on loan.

Now newspaper O Jogo comes with a similar, but different version. They claim that the deal should be done on Friday, when president Frederico Varandas and director Hugo Viana will fly to Liverpool. However, they add that a €15m buying option will be included in the contract, so the Reds wouldn’t be that interested in keeping Camacho.