Ousmane Dembele’s situation at Barcelona is complicated and if things don’t improve, he could be edged out at the Camp Nou.

This has alerted clubs in England as the Sun reported that Liverpool manager Jurgen Klopp is keen on signing the 21-year-old in January, something which has made waves in Spain.

Thursday’s edition of Mundo Deportivo now claims Arsenal are also looking at the France international as the Catalan newspaper state’s Unai Emery’s side do not ‘lose sight’ of the player.

It is suggested the La Liga winners attacker has been on the north London club’s ‘list of goals’ in the transfer market, and the report has an explanation why the Gunners could be after Dembele.

It was the Premier League outfit’s head of recruitment, Sven Mislintat, who signed him for Borussia Dortmund from Rennes in 2016, when he was at the German club.

A year later, he swapped the Signal Iduna Park for the Camp Nou, but has struggled to be consistent for Ernesto Valverde’s side so far. 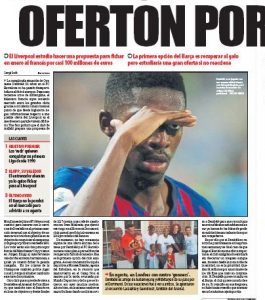 If Barcelona decide to sanction his sale, it should be seen whether Arsenal would submit an offer for Dembele to bolster their attack.