On December 28th, we carried a report from FcInterNews, who explained that Lyon are ‘strong on’ Olivier Giroud and have already proposed a 30 month contract worth €12m.

It was also explained that Inter Milan have long been looking at the Chelsea striker and are also monitoring his situation with the Europa League winners.

Tuesday’s edition of Sport claimed Atlético Madrid are in the market for a new attacker and Paris Saint-Germain’s Edinson Cavani remains a priority, whilst Borussia Dortmund’s Paco Alcácer is identified as the second choice target for them in the winter market.

It’s claimed Diego Simeone’s side have identified ‘other options’, if they fail to sign their priority targets. 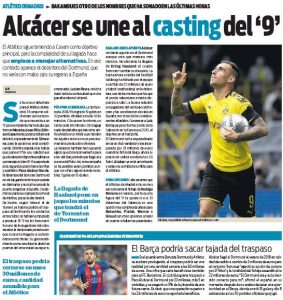 The former Arsenal man is included in the ‘other options’, along with Beijing Guoan’s Cédric Bakambu, RB Leipzig star Timo Werner and AC Milan’s Krzysztof Piątek.

Giroud’s contract at Stamford Bridge expires after this season and after falling behind Tammy Abraham and Michy Batshuayi in the pecking order at Chelsea, the France international could push for a transfer in January.

‘Drowned by their own philosophy’ – Liverpool defeat analysed in Spain, not a good night for Jürgen Klopp’s side

Everton and Chelsea have now ‘informed themselves’ about exciting defender –...