William Saliba’s situation at Arsenal is a sorry one.

Mikel Arteta has excluded the 19-year-old from his core plans at the Gunners season, and the defender has been restricted to getting minutes in the Premier League 2 and EFL Trophy.

If he’s to continue his progression, and if Arteta doesn’t quickly change his opinion, then a move in the January windows looks essential. That’s seen multiple clubs linked, and L’Equipe take up the situation in their Saturday edition.

The French newspaper explain that when at Saint-Etienne, Saliba was considered an even better prospect than Wesley Fofana, who signed for Leicester City in the last window.

Fofana moved for more than €30m and has been a regular for Brendan Rodgers’ side so far this season, so Saliba’s situation is inevitably causing eyebrows to be raised in France. 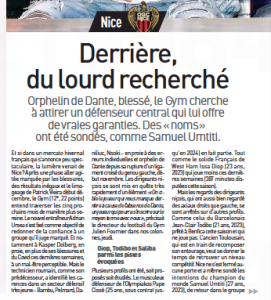 L’Equipe bring Nice into the picture as a possible destination, although it’s made clear ‘competition is fierce’ for the Arsenal player.

Multiple clubs in France, Germany, England and the Netherlands are keen, and ‘all options are open’ for a January exit.

Should Arsenal see any future at all for Saliba then a loan move within England would make sense.