Rumours of Erik ten Hag joining Tottenham this summer never really got off the ground in the Netherlands.

The claims about the Ajax manager came from elsewhere and the Dutch media hardly covered it. There certainly wasn’t any widespread worry about Ten Hag ditching the Amsterdam club.

Then, at the end of the week, Ajax announced their manager had agreed a new deal with them, and it was therefore clear that he wouldn’t be going anywhere. Some reports put this as him rejecting Tottenham, whilst others stated Spurs had decided not to pursue the coach after an initial meeting.

In reality, the truth may be neither, with claims built up to be something which never reflected the actual situation.

Saturday’s edition of De Telegraaf has an article on Tag Hag’s Ajax renewal, and all the 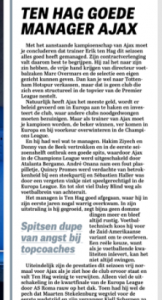 reasons for the partnership to continue are detailed. There’s not much said on Tottenham, other than that the idea won’t have been so attractive, given Spurs are not ‘structurally’ part of the Premier League’s top four.

That lack of near-guaranteed Champions League football is clearly seen as a big downside, with Tan Hag getting that at Ajax, along with a title challenge every season.