Olivier Giroud’s plan to leave Chelsea in the winter market didn’t work out after the Blues blocked his exit.

Inter Milan were heavily linked with the France international, while Lazio failed in their efforts to sign him in January.

With a contract expiring in the summer, the striker can join another club on a free transfer.

This weekend’s edition of Tuttosport takes a look at those players Lazio can bring in for nothing.

It’s claimed ‘the most probable arrival remains that of Olivier Giroud’ and Lazio have been in ‘constant contact’ with the 33-year-old after a transfer in January didn’t materialise.

With the former Arsenal man available on a free, he will have more options when deciding his next destination. However, the Italian newspaper states the option to join Simone Inzaghi’s side ‘tempts’ the Chelsea player. 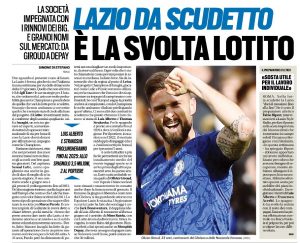 Giroud has one goal in eight Premier League appearances for Frank Lampard’s side this season, and has been much more prominent since the window closed.