Arsenal are probably the English club linked most to Andre Gomes over the past couple of weeks.

On Saturday we covered claims from Spain that Unai Emery has been doing investigative work to find out whether he wants to sign the player or not, wanting to know what he’s like off the pitch.

Then on Sunday Mundo Deportivo reported the manager has ‘asked’ Arsenal to sign the Barcelona midfielder.

Monday’s edition of the same newspaper reports Barcelona want their exits sorted out within a week, and that includes Gomes. The Spanish club are keen to get business done before their preseason tour of the US and don’t want to take players who are expected to leave. 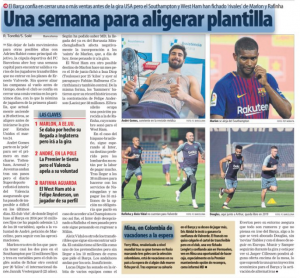 Gomes is said to be on ‘pole’ to be first to leave and Mundo Deportivo claims Arsenal, Tottenham, Juventus and Valencia are all following the player.

Over the weekend it was admitted in the Catalan media that Tottenham and Juventus links are simply recycled from last summer and there’s been no actual offers for the player.