It’s been a while since we’ve seen the name Amadou Diawara linked with a move to the Premier League, but he’s back.

We have Corriere dello Sport to thank for it, as they look at the deals AS Roma could do in the summer involving the Serie A side and their counterparts in the Premier League.

Spurs are immediately brought to the fore, as they currently have future free agent Jan Vertonghen on their books, but have also been linked with a move for one of their former loanees, Pau López.

However, the newspaper say Diawara is in the same boat as the Spanish goalkeeper, as he has suitors in England, but there is ‘one above all’ in Tottenham.

The last we heard of Spurs being interested in the 22-year-old was back in January, back when the Italian media believed they and Chelsea were ‘closely studying’ the Guinea international. 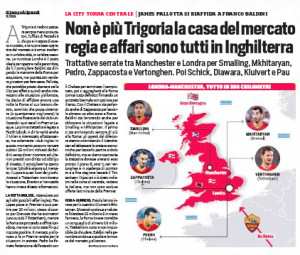 Arriving from Napoli in a £19m transfer last summer, the defensive midfielder has seen his time on the pitch limited this season because of a couple of meniscal injuries, totalling just 17 starts this season.

Should Roma sell, you would expect them to want all their money back and perhaps a bit more considering he still has four years on his deal and has many campaigns ahead of him, being just 22 and all that.