Home Premier League Everton “One of best coaches of my career” – Player explains what made...
SHARE

The outlet managed to speak to Nikica Jelavic, who among the many clubs he played for in his career, there were the likes of Everton, Hull City and the Hammers.

The striker, who’s now retired, featured for the Toffees between January 2012 and January 2014. That means he spent over a season under the management of David Moyes, and had very good things to say about the current West Ham boss.

Jelavic claimed that the Scottish coach was different from others in the Premier League, as he’d do it ‘all by himself’.

“Along with Walter Smith, Moyes is one of my favourite and best coaches in my career,” Jelavic told Večernji .

“You know that in England club managers have their many assistants who prepare and do training, but Moyes did it all himself, he’s a coach who liked to have everything under control. He worked a lot with the players.” 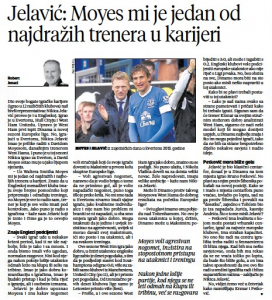 The 36-year-old also explained Moyes gave him a crucial support when he needed it most.

“Every player enters a period of crisis, when you’re not doing well, it was the same with me. And then we’d have a very pleasant, normal conversation. You didn’t immediately fly to the bench or move to the stands with him after a few bad games. He had very good communication with the players, he had a human approach when it came to playing, but also personal topics.”

Jelavic highlighted how demanding Moyes used to be at that time, pointing out some of the characteristics the manager may have kept to this day.

“He likes aggressive football, of course he took care not to concede a goal, but he liked attacking football, a lot of it went over the wing. But we really had great players at Everton then, very good individuals and we had no problem defending or attacking, we played very well in both directions.

“I can point out that he only and always insisted on aggression, you always had to give your maximum, go one hundred percent in the game, but also in every training session.”