Samuel Umtiti’s contract situation at Barcelona is still remains unresolved and the Catalan club have long been trying to convince him in signing a new contract. His current deal runs down in 2021.

Marca reported earlier the defender wanted his wages tripled to sign an extension. However, his employers are unwilling to meet his demands.

Umtiti’s current deal has a €60m release clause. The La Liga winners want to tie him to a new deal so that they can increase that substantially.

Despite the two parties’ failure to reach an agreement over a contract extension, Umtiti stressed that he will be at Barcelona next season and will only leave the Camp Nou if the Catalan club decide to throw him “out of the door” or if he comes to the conclusion he wants an exit.

When asked if he’s likely to continue and renew at Barca, Umtiti said: “Oh yes. I’m at a club that allowed me to realise my dream of playing there. I’m still under contract at the moment. So for me to leave, either they throw me out the door or I decide to leave,” Umtiti told L’Equipe. 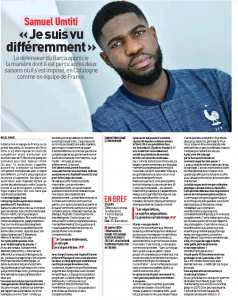 The France international reiterated that Barcelona want him to commit to the club by signing a new deal. However, Umtiti warned that the resolution to his future talks could take “some time”.

“It is the club who wants it (new contract)… That is even better, it means that the club, the city where I am, want me to sign so that I extend my contract. It takes some time,” he said.