They’ve shown a list of clubs who are interested in signing the player in the summer, pointing out that Sporting had already made a personal offer for him.

Tavares’ contract with the Foxes expires at the end of the season, and the 19-year-old is apparently not keen on signing an extension with the club.

However, Sporting were quick on dismissing those claims. In a short story from newspaper Record today, an ‘official source’ from the Lions not only claimed there’s been no offers for the player, but also said he’s not in the club’s plans for now. 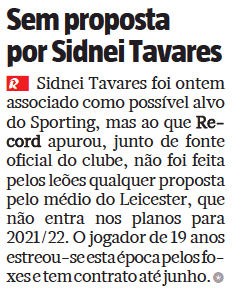 Sidnei Tavares is a product from Leicester City’s academy, and was only given one chance in the first team so far, in a Europa League clash against Slavia Prague this season. He’s apparently looking to leave the club due to the lack of playing time.

Notícias ao Minuto had also claimed that Newcastle United are interested in his signing. But now that Sporting’s chase, which was labelled as so strong, was quickly dismissed, we can’t be sure if the Magpies are really in for the midfielder as well.