Aston Villa were one of the busier clubs in the transfer market, with Dean Smith showing no hesitation in splashing the cash to build his squad for the Premier League.

No fewer than 12 new players arrived at Villa Park throughout the window, with an outlay of £133m putting Villa among the biggest spenders in Europe.

That would be more than enough for most but more than a week after the window has closed and stories concerning Villa are still emerging.

Earlier this week we covered a report that they were keen on Pione Sisto, but the player turned them down, and L’Equipe have added another name to the list.

According to the newspaper, Villa were keen on Angers midfielder Baptiste Santamaría this summer.

They say that Villa made ‘offers’ for the 24-year-old, but they were seemingly rejected by the French club, who are not ke 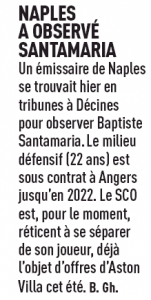 en to part with him but face a fight as Napoli are now showing interest.

There’s no mention of how much Aston Villa offered for the player, or how significant their interest was, just that they made offers for him.

Santamaría is a defensive midfielder by trade and Villa signed two of those in Douglas Luiz and Marvelous Nakamba, so perhaps they turned their attention to those two after it became apparent Santamaría wasn’t available.