Home Europe Offer on Tottenham transfer creeping in the right direction, slowly does it
SHARE

What originally started at €10m is moving in the right direction, but given it’s still stated Spurs want €30m, it’s not really moving there very quickly.

Dembele has a year left on his contract with Tottenham and Inter Milan will expect to get him for less because of that scenario. Whilst there may be some truth to that closer to the end of the window, it makes no sense for Spurs to agree to a knockdown price at this stage.

The Belgian midfielder may change his stance and jump at a renewal and other clubs can always come in, but Tottenham will know they shouldn’t have much trouble finding someone to beat that €16m later in the window.

From Inter’s perspective they may be going slowly because of their financial situation. It’s 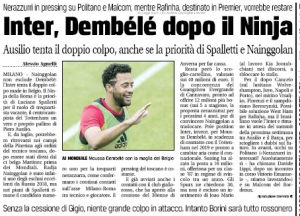 hard for the Italian side to complete a purchase at the moment so they may as well try with the lower offers.

Leggo echo other reports of Kia Joorabchian working to ‘unlock the deadlock’, and the consideration of Joao Mario being part of the deal.